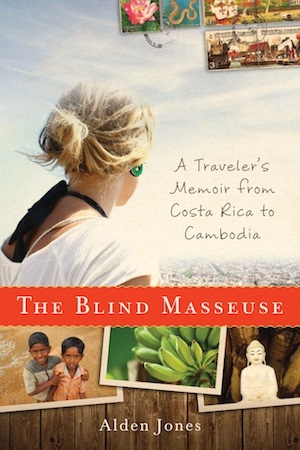 The debut memoir from award-winning author Alden Jones―”a witty and daring chronicle” (The Rumpus) and “mesmerizing travelogue” (Shelf Awareness) that “is smart and thoughtful, and also a page-turner from second one” (The Huffington Post)―explores the ethics of an American traveler moving through the world.

We travel in search of what is unknown to us, but what costs are attached to the exoticism of the traveling life? Over the course of fifteen years, Alden Jones travels to Central and South America, Asia, Cuba, Egypt, and around the world on a ship, sometimes for extended stretches, other times as an observer, a photographer, or an educator for brief trips. She struggles with her shifting identity as a tourist and a traveler, and considers a third option: going native. Does the true traveler seek to integrate into a new culture? Is there something suspect about seeking out the charm of the unfamiliar?

The Blind Masseuse tackles these and other ethical questions through a series of riveting travelogues. Jones is swept into a protest against the privatization of water in Bolivia, recovers from heartbreak by studying Spanish grammar in Nicaragua, creates a photo show from a series of blurry photographs taken out a bus window in Myanmar, gets close with an Angola war veteran in Cuba, and finds herself returning repeatedly to Costa Rica, where she lived for a year as a volunteer English teacher. The relationships she forms along the way reflect how someone with a traveler’s identity must make peace with “growing up” and “settling down.”

The Blind Masseuse is a candid, insightful, and thought-provoking memoir that is sure to trigger lively conversations about American identity, cross-cultural communication, and about how, and why, we travel.

Read an excerpt from The Blind Masseuse

“Alden Jones’s refreshing humor, young perspective, and informed cultural awareness make The Blind Masseuse stand out from other travel memoirs. This is a smart and entertaining read.” —Lucy Bledsoe, author of The Big Bang Symphony

“Wonderful travel writing, in the line of Innocents Abroad by Mark Twain. Alden Jones is humorous like Twain without being cynical; she treats all her amazing encounters and strangers with mucho love. She makes highly entertaining and fresh stories out of culture clash, traveling as an observant gringa, fluent in Spanish. She arrives at many deep insights about other cultures and ours, while transcending the form of travelogue into amazing and dramatic story-telling.” —Josip Novakovich, Man Booker International Prize finalist, 2013

“Smart, witty and well-traveled, Alden Jones has given us a beautifully written book that honors the wandering spirit in all of us. Take this journey with her and return newly alive to the pleasure of moving through the world.” —Ana Menéndez, author of Adios, Happy Homeland!

“Jones takes us straight to the heart and to the resonating pulse of exotic pin dots most of us never have the nerve to explore. In writing both lyric and colloquial, she captures the voices that emerge in each landscape and setting, from the yips of spotted hyenas to the jangle of vendors in urban streets south of the border of the everyday. Her journeys are examined with a growing self-knowledge and a delicious sense of humor. The Blind Masseuse an expedition into the interior life of a smart, engaging American woman who makes us feel at home no matter how far from home she takes us.” —Maria Flook, author of Invisible Eden

“Alden Jones is something of a ‘Prodigal Daughter,’ and she has come home from her long travels to tell us the stories from her own life and education. We both delight and learn from her wisdom and her tales of nine places in the world.” —Brian Bouldrey, author of Honorable Bandit: A Walk across Corsica